Meet Chidume, his articles are so sublime that one of them caught the attention of 5 million viewers across the globe including Korea, Vietnam, and Japan.

He’s been in technical writing for over 5 years and he was happy to share his journey from ground zero.

Chidume has worked with over 10 different tech brands and he shares his rejections and how he turned them around into wins.

Then stick around, take notes and read till the end.

How did you get into Technical writing?

Hello everyone, my name is Nnamdi Chidume and I am a technical writer as well as a software developer.

I have been in the technical writing scene for a very long time, since 2017 to be precise, during the days of scotch.io

I was very much intrigued by the number of articles being written around “Angular” when it was new and with high expectations.

There were so many people jumping on the trend and I was surprised by the number of articles written by Nigerian tech developers.

I told myself, “Okay, I can do this” because I love to teach and write. So, I started with scotch.io and I sent an article to them for approval but I wasn’t accepted into scotch.io.

Later on, I learned about Medium where I can publish free articles, so, I started writing and publishing.

Before Medium, I wrote for goldbust.io. My first article was about how to use google analytics angular.

The articles had a lot of views and from there it gave me the momentum I needed to do more and write more.

The encouragement helped me to move on and from there, then,  I got into scotch.io where I was previously rejected but I didn’t get to publish a lot there.

MUST READ:  Secrets of the freelance tech writers with Solomon

Later on, around 2018, I got accepted into bits and pieces, now called bit.dev and that was where I wrote a lot of high-end articles

One of my best articles to date was on “Solid Principles” and it amassed over 30,000 claps to date and counting. Then from bits and pieces, I went on to work at LogRocket, where I wrote 46 articles based on different technologies.

I have written for Strapi, stack and build, and Hackmamba.io. Currently, I’m still working for Logrocket and other corporations.

I would say technical writing has helped me with software development because when you teach you also learn.

It also upped my software development game up to 10x and I learned a lot even from the comments, the audience, and the book writers in CSS and HTML.  I got to learn from them and also my fellow highly seasoned technical writers.

What’s one of your best experiences in technical writing?

My best experience would be after I published the article “Solid Principles”, so, when I wrote the draft, the lady I was working with didn’t edit it.

She published it exactly the way it was and I was really worried about how it was going to perform because at that time they had a high number of readers.

Solid Principles is not a topic you joke about; you have to state your facts very well and be right unless it won’t look good for the brand. It’ll seem like they’re publishing the wrong information.

MUST READ:  Secrets of a freelance technical writer with John

The next day, I looked up the article to see how well it did. The post went far above my expectations. It gathered 5 million views in 2 days and in 3 days, it had gathered 4000 claps. The funny thing was that the main audience was Korean, Vietnamese, and Japanese.

I was happy that I was able to put out something that people from around the world liked.

My second best experience was when I got a gig to write articles and I was paid monthly. Imagine being able to do what you like and being paid for that.

My worst experience is when I’m burned out and unable to meet up with deadlines.

What are some of your writing weaknesses?

I always write in the passive voice and Grammarly has helped me to change that.

It helps me to construct sentences so that I can convey information without confusing the audience. That’s my weakness.

So over the years of consistent writing, I have improved. I took a Google course that taught me a lot about technical writing but they were mostly focused on the active and passive voices and the effects that they have on readers.

If you could turn back the hands of time would you want to change anything about your career?

As it is, I think I am okay with everything. The only thing I might want to change is to learn to write in active voices earlier.

How do you manage criticism?

They make me the best person ever so I embrace them. Criticism helps me understand the software even better and it helps me put forward a better article.

So usually, I thank the person for the criticism, whether they are right or wrong, then I go back and review the article and make some updates.

What would you want to say to people getting into technical writing?

Keep the articles very short because most of the readers are lazy readers and they won’t pick any article that is longer than 10 mins.

Write in a very simple language, If possible, write in your native language and then translate it to English, if it helps.

Most importantly, write almost every day so that it becomes a part of you.

What do you use to present articles to clients?

I have a collection of articles I have written on Google Drive and I convert them to PDF and share them with clients.

I think it’s time to ditch Google Drive and switch to Contentre with more features and control. Learn more.

Now that you’re here, let me briefly recap the most important features Contentre can offer you: 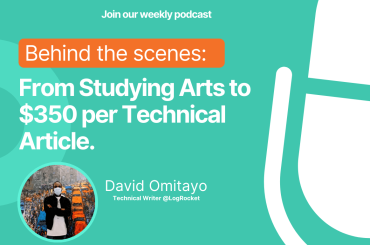 BTS 15: From Studying Arts to $350 per Technical Article. 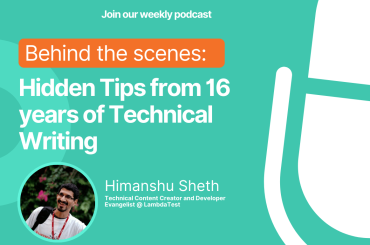 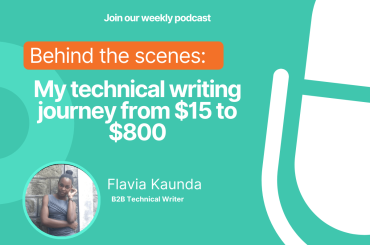